Posted on 25th November 2009 by The Hylton-Potts Legal Team

Kelvin MacKenzie has the solution: a TV hustings show modelled on The X-Factor.

“If I were the political leadership of this country I would go to Simon Cowell and ask him to come up with a format,” he writes in his Sun column. 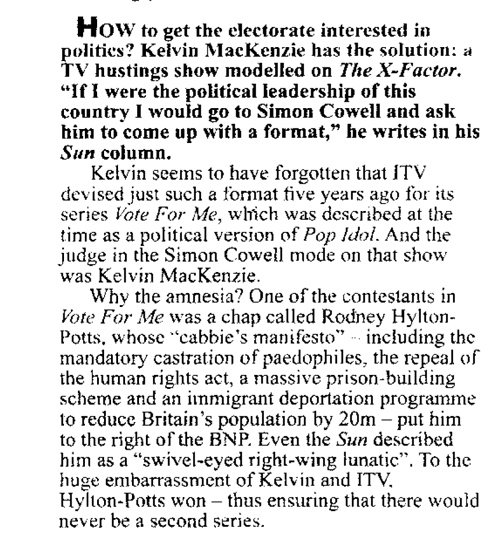 Kelvin seems to have forgotten that ITV devised just such a format five years ago for its series Vote For Me, which was described at the time as a political version of Pop Idol. And the Judge in the Simon Cowell mode on that show was Kelvin Mackenzie.

Why the amnesia? One of the contestants in Vote For Me was a chap called Rodney Hylton-Potts, whose “cabbie’s manifesto” including the mandatory castration of paedophiles, the repeal of the human rights act, a massive prison-building scheme and an immigration deportation programme to reduce Britain’s population by 20m – put him to the right of the BNP. Even the Sun described him as a “swivel-eyed right-wing lunatic”. To the huge embarrassment of Kelvin and ITV, Hylton-Potts won – thus ensuring that there would never be a second series.