Posted on 22nd July 2014 by The Hylton-Potts Legal Team 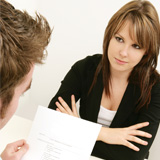 The Benefit/ Tax Credit Offices and Local Authorities are on the lookout for people claiming benefits to which they are not entitled, either deliberately or by accident. If they think you have committed a crime, they write stating that you have to attend an interview usually under caution.

The letter is often signed by somebody who may not sound like a fraud investigator but is. “Benefits Enquiry Officer” or “ Audit Officer” but does not tell the whole story. Often the letter says that the interview is under the Police & Civil Evidence Act, and tape recorded and that you will be given a caution.

The caution says that you do not have to say anything, but if you do anything you say can be used in Court against you. Clearly such a letter should not be ignored.

Should you attend the interview?

The standard advice given by solicitors is to attend the interview but to take a professional advisor. No great surprise there! The part about getting expert advice is correct, but what is completely wrong is the fact that you have to attend at all.

Most people find these interviews intimidating. They thrust documents at you and try to catch you out and they are not your friends. Often there is a “hard man” “soft man”, two pronged approach (good cop, bad cop just like on TV) but not so entertaining when you are in the hot seat.

A knee-jerk reaction is to telephone the Fraud Office when you get a letter like this. Do not. What you say may well be recorded and will certainly be noted. Many investigators record voices for signs of stress and use that as evidence of guilt.

In one survey it was found that 4,000 people ended up being prosecuted on the basis of evidence being obtained in this way in a period of four months, so clearly it is widespread. You therefore do not contact them, but leave that to your expert advisor.

We contact the fraud investigator Local Authority and obtain details of their concerns. You probably know what those concerns are but we like to hear what they say. We clearly want to get your side of the story to them, because otherwise it will go to somebody called a decision maker, who lurks in in Glasgow or Belfast, who will decide whether to prosecute you, without your input.

That would be most unwise.

What we do is send in written statements. This is called a Criminal Justice Act Statement and has the force of an Affidavit and if it contains untruths you allow for perjury so it is just as good as being tape-recorded. The advantage however is that we painstakingly and skilfully draft your story and send it in by post, rather than getting it across under huge, intimidating pressure is a police style interview.

You believe you have done nothing wrong

It is not what you think that matters. It is what they think. That is why you need expert help because you may not even realise you have broken the law. The regulations are very complicated and even expert lawyers pore over some of the wording, so what chance has a layperson got?

Sometimes the Benefit Authorities suspend your benefit to try to force you to attend the Interview Under Caution. It is unlawful and they are not allowed to do that and can be stopped.

Some solicitors advise attending the interview and giving a “no comment” interview which you will also have seen on TV. Nothing annoys a full investigator more than that approach. This Increases their costs and time they spend on your case (they are not very well paid). It is not the way to go.

If you are prosecuted you should seek expert help immediately. Even after a prosecution has started, and a summons served, it is still possible to have it stopped and replaced with an Administrative Civil Penalty which is administered in private. This “slap on the wrist” often involves repaying what you have had wrongly, with up to 30% penalty added, but that can be dealt with by instalments if necessary and deduction from future benefits which is relatively painless and much better than a criminal prosecution.

At Hylton-Potts our approach is different and has been honed and improved over the years, and has been proved time and time again, to be the best way to make these problems go away, and avoid the disaster of a criminal prosecution, publicity or even a prison sentence.

The important thing however is to take advice early, but there is no Legal Aid for what we do.

We are here to help you and with our highly competitive fixed fees can see the whole matter through at affordable prices with complete confidentiality and you will find we are very good at what we do.

We are not doctors, but we know that the impact of our legal work can be as important and life changing as that of a surgeon.

We are informal and approachable but also deadly serious about helping you, just like a top surgeon.

We would be interested in your comments, please leave them in the section below