Posted on 19th February 2016 by The Hylton-Potts Legal Team 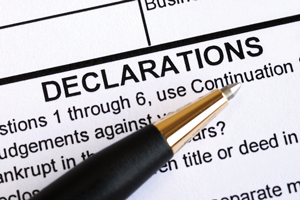 When the ex-wives of two very wealthy men discovered that their divorce settlements had been concluded on the basis of information supplied by their husbands which was clearly wrong, a series of legal battles culminated in a decision by the Supreme Court which shows that the courts may be expected to clamp down hard on those who give misleading evidence in such cases.

The two women claimed that their husbands had deliberately misled them by hiding their true wealth throughout legal proceedings to divide their respective family assets. The result was that they had accepted smaller settlements than they were rightfully due. They asked the Court to set aside the earlier divorce settlements that had been agreed.

In one case, the Court of Appeal agreed that the husband’s valuation of his business had been
fraudulent, but would not overturn the settlement, holding that the outcome would not have been significantly different.

In the second case, it was discovered that the husband had failed to disclose the existence of
significant assets. He was later convicted of fraud. However, the Court of Appeal refused to reopen the divorce settlement.

The Supreme Court has now overturned both decisions, which may have a significant impact
on divorces throughout the land as it clearly demonstrates that where there is material
deception in disclosing the true value of assets during divorce proceedings, the courts are likely to order the settlements to be reconsidered.

If you are concerned that your spouse is attempting to present themselves as having fewer assets than they really do, contact us. We are experienced in ensuring full disclosure of assets is achieved.

We can advise on all aspects of family break-up and financial provision on divorce.