Posted on 29th April 2016 by The Hylton-Potts Legal Team

We receive thousands of emails, letters and phone calls to do with suspected benefit fraud. In our experience though, it is often the case that when claims are investigated, mistakes have been made and errors have occurred rather than any malicious intent being found.

It should come as no surprise then, that recent research by Ipsos MORI, an independent research organisation commissioned by the Department of Work and Pensions (DWP), found further concrete evidence of this to be true. The research, published just last year, explores the ways in which Local Authorities tackle fraud and error within Housing Benefit.

In today’s blog post, we’ll be discussing the results with you, and explain exactly how they affect you.

According to the study conducted by Ipsos MORI, Housing Benefit fraud and error is estimated to account for 6% (or £1.45 billion) of total benefit expenditure. It has been reported that the main contributor to this is claimant error, which accounts for 3.7% (or £900 million in monetary terms) of total benefit expenditure. Despite the bad press around these days, fraud actually accounted for 1.3% in 2012/13, rising to 1.8% in 2013/14.

The reason for the research being commissioned was that the DWP wanted to reduce these figures relating to error. However, Local Authorities do not work in a regulated manner. In other words, the processes they use to investigate fraudulent claims and process Housing Benefit, can vary from place to place.

So, the DWP wanted to understand how Local Authorities were approaching fraud and error prevention, what the differences are, and how they could support them. To do this, Ipsos MORI conducted an online survey of benefit managers (or those of a similar position) at 380 Local Authorities across England, Scotland and Wales, who administered Housing Benefit.

The questionnaire, conducted between 1st and 26th September 2014, included questions on many areas, but it is fraud and error prevention activities, Housing Benefit Matching Service (HBMS) referrals and reviews that provide the most telling evidence, when it comes to the figures we’ve just discussed.

There were two key areas that suggest just how different Local Authorities are in the way in which they report error and fraud.

As can be seen from the above chart, Local Authorities take a range of actions to prevent Housing Benefit fraud and error, but the frequency with which some are performed are entirely dependent on the Authority in question. For example, 93% of those who responded to the survey performed verification checks on new claims, but only 44% did their own data-matching.

Also, with reference to HBMS referrals, all Authorities surveyed who receive them take action on them in some way, and the responsibility for this is split between Housing Benefit and Fraud Investigation Teams. However, the survey highlighted a flaw; while on balance Local Authorities rate HBMS referrals as ‘good’ at 62%, there are data quality issues with suggested improvements. 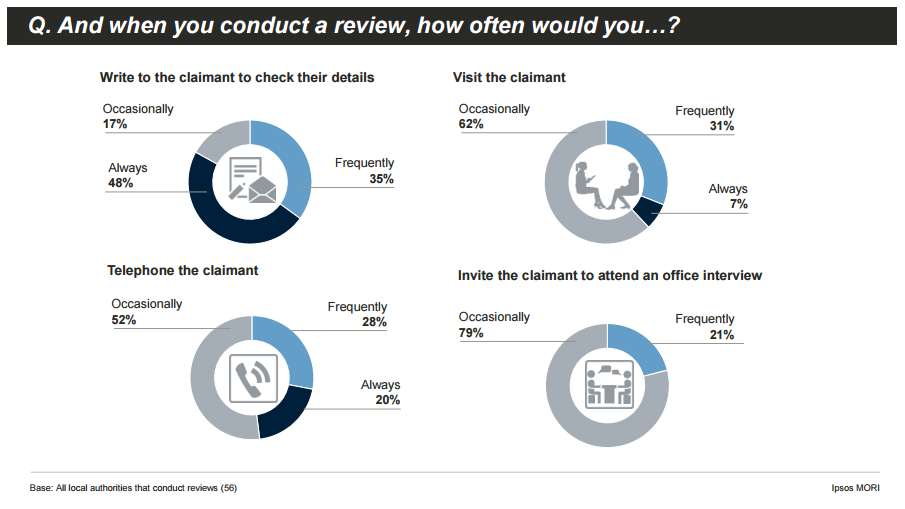 A review means that a Local Authority regularly considers all of their Housing Benefit claims, and checks that the information given by claimants is accurate. The question relating to reviews highlighted a strong flaw in Local Authority workings.

As can be seen from the results above, just 41% said that they conduct reviews on a regular basis, while only 29% of these have a dedicated team or person to do this. Those who said that they don’t conduct reviews suggested that this was due to either a lack of resources, that they were unproductive due to high volumes of change, or that they used a system like ATLAS instead.

Even the methods for review differ; 96% write to claimants, 52% visit the claimant, two in 45% telephone them and 25% invite the claimant for an interview. When it came to taking action on reviews, frequency again varies strongly, as can be seen in the results below: 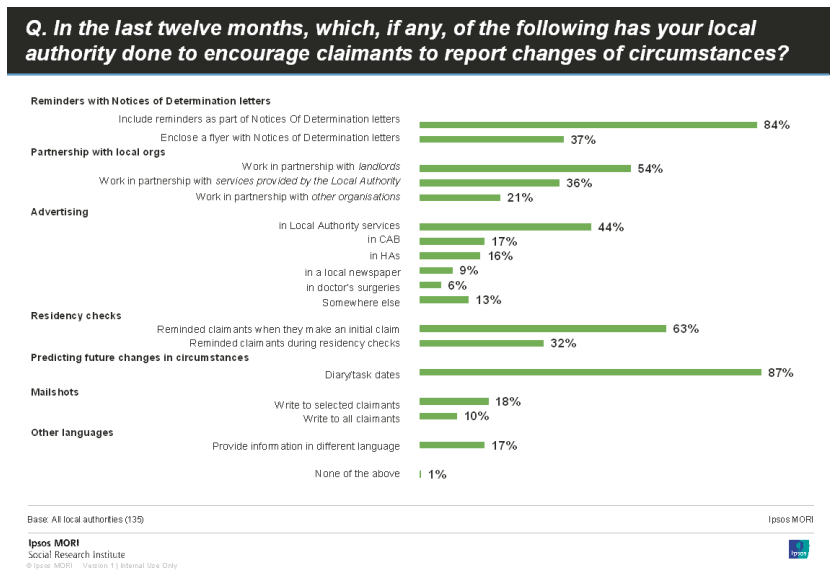 Aside from these two key areas, it’s interesting to see how issues like changes in circumstance were reported. Over half of Local Authorities allow claimants to report change of circumstances by phone without requiring confirmation in writing, but that still allows for a wide margin of error.

Although it was found that most Local Authorities schedule reminders, it is not all of them. Also, if someone has reported a change in circumstance over the phone, it might not necessarily be logged for a reminder. If people are not sent a reminder, or changes in circumstance are not followed up on, people might think that they have done what they were required to do. This then means they could potentially end up with a fraud claim against there name, when actually it was a simple mistake or miscommunication over the phone.

What this Means to You

The results from the report are clear; given that Local Authorities handle claims and potential cases of fraud in their own way, some cases of overpayments may be caught earlier and rectified sooner than others in different parts of the country. This of course has a knock-on effect for the innocent individuals being investigated, as it can take time for repayments to be made, mistakes to be admitted, therefore creating unnecessary financial hardship.

At Hylton-Potts, we see these cases on a regular basis. We understand how frustrating it can be to be denied your Housing Benefit when you’ve done nothing wrong. Luckily for you though, we have many skilled experts on our team that can help you overcome these problems. We are experts at avoiding criminal prosecutions, never allow our clients to be interviewed, and will challenge the amount of an overpayment with knowledge and professionalism.

So, don’t miss out on the chance to clear your name of a benefit fraud investigation, when you can get in touch with our expert lawyers today. You can call us on 020 7381 8111, or send us an email at [email protected].

We would be interested in your comments, please leave them in the section below.